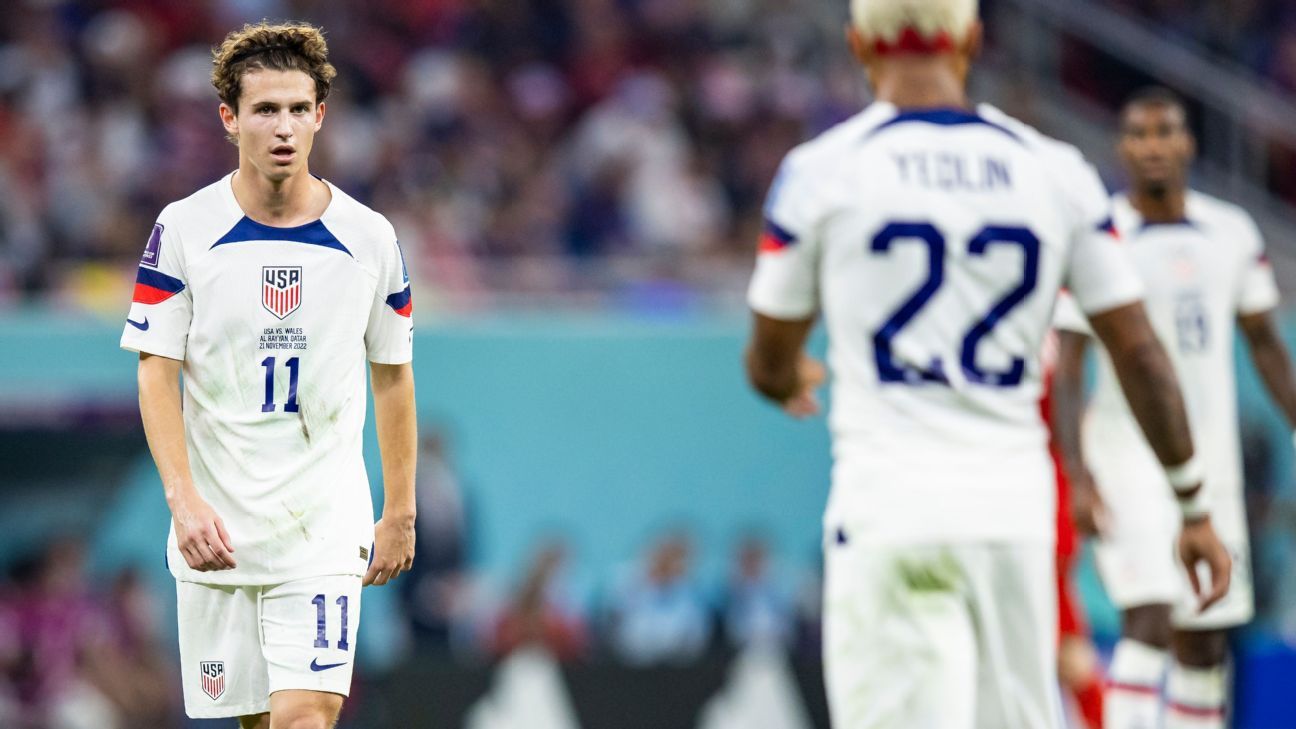 AL RAYYAN, Qatar — If someone unfamiliar with the result of the opening World Cup match between the United States and Wales had been standing in the bowels of Ahmad bin Ali Stadium afterwards, it might have been easy for them to assume the game had a winner.

Players from both teams are required to wind their way through a mixed zone lined with journalists — think a Hollywood-premiere type of setup — and field questions about the game. And as that process took place, the teams’ demeanors were at odds.

For the Wales players who came through, there was a giddy, positive energy to them. They had just trailed for 46 minutes without posing much of an attacking threat before national legend Gareth Bale earned and converted a penalty for the country’s first World Cup goal in 64 years. Wales coach Rob Page had been clear in the lead-up to the game that they wanted a single point, and they left with that mission complete.

The mood of the US team was decidedly less enthusiastic. There was no question it was an opportunity squandered, and even as many players tried to put the draw into a positive context, they were less genuine than their opposition.

US midfielder Brenden Aaronson’s description of the vibe in the locker room likely reflected the broader feeling from the fan base: “Disappointed,” he said. “Everybody was pretty disappointed.”

Had the US been offered a point before the game started, it wouldn’t necessarily have been viewed as a poor result. In the current format of the competition, dating back to 1998, teams that have drawn their opening match have gone on to advance 59% of the time. It keeps the US in a decent spot to advance but won’t do anything to quell any anxiety about meeting that benchmark objective.

Considering how the game played out, the postgame feelings of disappointment were inevitable.

“It’s tough. To have that goal, and then you feel like you have the game and you’re going to win the game, and it’s tough,” Aaronson said. “It’s a punch in the face and that’s what it is. But we gotta move on and look at the positives and look at the film, what we can do even better. Altogether I thought it was a really good performance.”

The weight of World Cup expectations is immense — almost as intense as the expectations the players put on themselves — and that’s where the young team’s lack of experience on this stage has the potential to be felt the most. Tyler Adams, the team’s wise-beyond-his-years, 23-year-old captain, seems to get that. Since he broke into the team in 2017, he has always been able to apply the appropriate perspective to whatever situation he has faced, and that didn’t change after Monday’s game.

Taking any other stance would not seem to do much good.

The tactical shift that changed the game

When scouting the US, Page concluded that his team would have success bypassing the American press and playing through the midfield. It was a massive miscalculation, and one he attributed, in part, to United States striker Josh Sargent dropping deeper into the midfield than expected, taking away passing angles into the central midfield. The result was a first half in which the US controlled the tempo, had the bulk of possession and, more importantly, prevented Wales from producing anything that resembled a dangerous moment.

“We didn’t get any players on the ball and we were having [to defend] wave of attack after wave of attack,” Page said. “We couldn’t have played 90 minutes like that; it could have been two or three [goals for the US].”

Despite US manager Gregg Berhalter’s superior tactical plan, though, the Americans didn’t take advantage in the way they probably should have. The goal — a beautiful sequence with Christian Pulisic driving forward and slipping in Tim Weah — came in a transitional moment, not out of the US buildup.

Page made two significant changes at halftime. The first was to bring on 6-foot-5 Kieffer Moore in order to play more directly, and the second was to press the US backline with three players instead of two. With Wales forced to send more players forward to seek an equalizer, it created more space for the US in their attacking half. More than anything that happened on the defensive end, it was the Americans’ inability to exploit that is worrisome from a forward-looking perspective.

“We had our moments in transition and the final pass in the final third just wasn’t quite there,” center-back Tim Ream said. “It’s a new experience, of course, but at the same time, we had our opportunities with 5-v-4s and 4-v-3s and we didn’t quite do enough. It’s not even about seeing the game out — they had one other shot on target than the penalty, I think. To limit them as much as we did and still come away with only a point is, yeah, listen, it’s disappointing.”

Assigning blame or credit can be a tricky game for anyone not privy to the intricacies of the game plan. It’s hard to argue that Berhalter didn’t get the starting XI right and that the team was set up with superior tactics for the first 45 minutes. However, once Page made his changes, the US were mostly on the back foot and Berhalter’s tweaks and substitutions to account for that did not have a positive impact. That’s a failure Berhalter must own.

What changes to expect for England

Herculez Gomez and Sebastian Salazar debate the biggest storylines and break down the best highlights that soccer in the Americas has to offer. Stream on ESPN+ (US only)

Generally, Berhalter doesn’t inform players of lineup decisions until the day before a game. That was the process against Wales, which gave the team one light training session to prepare for the game, and it will likely be the same approach ahead of Friday’s match against England. Adams said he expects there to be some rotation.

One change to expect: Aaronson in the starting lineup. Weston McKennie started out well against Wales, but he faded quickly after several weeks without a competitive match. Aaronson’s energy and skill on the ball is an upgrade over McKennie and should make this a straightforward change, with McKennie an option off the bench to come in for whoever is dictated by the state of play.

At striker, Sargent did not do enough to guarantee he would receive a second start, although that is certainly still a possibility. If Berhalter does opt to make a change, the expectation here is that it would involve Jesus Ferreira, based on how the coach has expressed his views on the FC Dallas designated player and Haji Wright. Berhalter has praised Ferreira’s ability to play within the team’s preferred game model and likes the change of style offered when using the bigger Wright off the bench.

Gio Reyna does not appear to be in line for a start. If he was, it’s hard to explain why he wasn’t used as a sub against Wales. While allowing for the possibility of gamesmanship, Berhalter said, “I can envision [Reyna] playing some role against England.” That’s not exactly the way a coach usually speaks about a player he’s expecting to play 60-plus minutes, but it’s not unprecedented for a coach to not be totally forthcoming when discussing injuries.

Assuming Dest is fit, the backline should go unchanged. Walker Zimmerman’s momentary lapse of judgment was a bad moment that probably cost the team two points, but that shouldn’t outweigh the rest of the game, in which the back four played at a very high level.